What’s the dirtiest place in your home? Despite all the germs floating around your bathroom, there’s actually way more nastiness happening in—yikes!—your kitchen, than practically anywhere else in the home, according to a study by the National Sanitation Foundation (NSF).

“The areas in which food is prepared actually contain more bacteria and fecal contamination than many other places in the home,” the study says.

If you’re horrified and ready to grab the disinfectant and head straight to the kitchen, you’re not alone. But you probably want to know which items in your kitchen are making it such a thriving cesspool—and how you can fight against this potentially dangerous bacteria. Here are the grossest items in your kitchen, according to the pros. 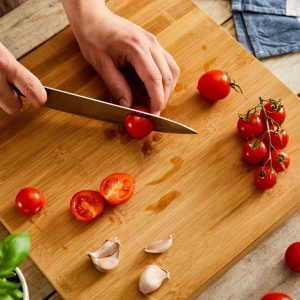 It’s no surprise this common kitchen item makes the top of the list, with all the food prep we do here. The NSF found that 18% of cutting boards contain fecal contamination from E. coli bacteria, which is often found in raw meat. And in recent years, both wood and plastic cutting boards have proven harder to keep clean than originally thought, especially if they’re several years old.

“The issue arises when people are unable to clean cutting boards properly because they have deep grooves from being used so much,” explains dietitian and food safety expert Bri Bell. “Bacteria can live in the grooves and contaminate your food. It’s time to get a new one if you can fit a fingernail in the groove, because then you know it’s too deep to properly clean.”

A more recent study conducted by Sainsbury’s Home also found that 40% of people are putting themselves at risk by using the same cutting board for meat and vegetables.

“We use cutting boards to prepare foods like raw meat, which can spread salmonella and E. coli,” says Brian Sansoni, spokesman for the American Cleaning Institute. “A good rule of thumb in safe food preparation is to avoid cutting raw meat, poultry, or fish on the same surface without thoroughly cleaning it between uses.”

Even better, he says: “Have two cutting boards: one reserved for meat and the other for fruits and vegetables.” 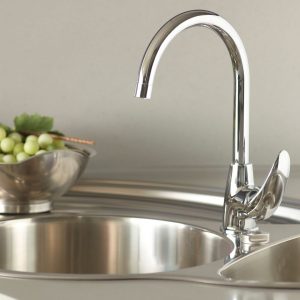 If you thought your door handles were dirty (and they are), then this next bit will really make you run for the disinfectant. According to the NSF, 45% of kitchen sinks were found to contain salmonella and E. coli. Even if you aren’t regularly rubbing raw chicken on your kitchen faucet, there’s still a logical reason why it’s one of the nastiest places in your home.

“The faucet is a high-touch area,” Bell says. “We often touch it with dirty or wet hands, so it gets dirty quickly between washes, and people tend to clean them only when they look dirty—not realizing it has bacteria regardless.”

To keep the poop particles out of your kitchen sink, wash the sink regularly with disinfectant.

“Particularly during the fall and winter, when colds and flu are at their peak, it’s a good idea to keep faucet handles clean to prevent the spread of germs,” Sansoni says. “At least once a day, wipe down faucet handles with a disinfectant wipe.” 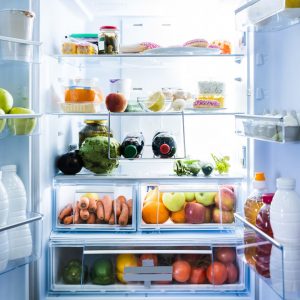 Here’s another item that comes in close contact with our food but tends to be neglected when it comes to regular cleanings. And if you’re anything like the participants of this 2019 study by the American Cleaning Institute, chances are you can’t even remember the last time you cleaned the fridge.

And there’s a reason why that’s scary: “Spoiled food and spills can attract germs,” Sansoni says. To be more specific, these germs include things like salmonella, listeria, and E. coli, according to a 2013 Germ Study by NSF.

The best way to keep yourself from getting sick due to contamination in the fridge is by regularly inspecting and cleaning it.

“Wipe up spills with a paper towel and warm water as they occur,” Sansoni advises. “Every week, before doing your grocery shopping, do a quick purge of food that has expired or gone bad, then clean the inside of the fridge by emptying out all the contents, removing the drawers, and scrubbing with a sponge, warm water, and liquid dish soap.” 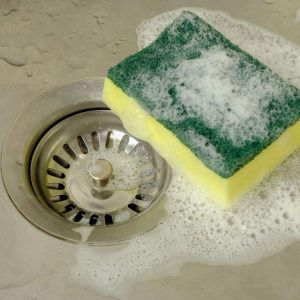 This item is so gross we decided to save it for last (just in case you started reading this while snacking, now’s a good time to stop). Kitchen sponges, dishrags, dishcloths—whatever you call them—are the downright nastiest thing in your kitchen—if not your entire home.

In fact, more than 75% of sponges contained salmonella and E. coli, the NSF found—and since we often use them on things like countertops and dishes, you can only imagine how that bacteria spreads.

“The sponge holds onto moisture and bacteria from food after washing the dishes,” Bell says, “so it’s a perfect environment for bacteria to multiply, and people don’t tend to clean it, because it’s considered a disposable item.”

Although this news makes it tempting to replace your kitchen sponge between each and every use, Bell explains there’s an easier way to keep the grossness at bay.

“The best way to clean a sponge is to run it through the dishwasher with your regular dishes, or microwave a wet sponge for one minute,” she says. “Both these methods will kill most of the bacteria growing in the sponge that is likely to make you sick, but it will still contain some bacteria.”

In fact, Bell makes a case for ditching the beloved kitchen sponge entirely.

“My recommendation is to actually stop using sponges for washing dishes, and instead use a scrub brush or washcloth that dries quickly and completely between uses,” she says.

But if you can’t live without your beloved sponge, at least do everyone in your household a favor by replacing it every couple of weeks.

Larissa Runkle is a writer, gardener, and herbalist living in the San Juan mountains of Colorado. Her work has been published in lifestyle publications, and she’s also the creator of the weekly newsletter @rootedintribe.